You may have heard a yoga teacher cue to engage your bandhas during class, but what does this actually mean and what are the benefits?

In Sanskrit, Bandha means to ‘hold’, ‘tighten’ or ‘lock’.
It can be a physical, energetic, and metaphorical action that affects our pranic (life force) body.

These interior body locks are used in asana and pranayama practice to redirect/control the flow of your prana. In turn, this serves to trap energy fluids by locking different parts of your body, which helps to unblock the central Sushumna channel.

Sushumna is the name given to the main energy channel of the subtle body, running down the central axis of the body through the spinal cord. Individuals may only experience a pure and equanimous state of mind when prana flows freely through the Sushumna.

SO WHERE DO THE BANDHAS COME FROM?

Traditionally in India, bandhas were part of mudras, and in ancient texts like the Hatha Yoga Pradipika, the two were almost indistinguishable. Bandha (and mudra) work has fallen out of practice in most modern western yoga classes, likely due to the increasing distance from traditional yoga.
Mudras and bandhas bring stability to the mind. They work at a deeper and subtler level than asanas, balance the elements, and develop awareness at the level of the organs.

✨ A Mudra is a particular posture that channels energy into particular chakras (plexus) and in turn affects the organs to which it connects.

✨ A Bandha means lock. It involves contraction of the muscles and organs causing energy to accumulate at a particular plexus.

If you ever wonder what enables some yogis to ‘take flight’ or ‘float’, and perform more advanced yoga poses, the likelihood is they have a strong ability to access their bandhas/internal energy locks.

Hatha yoga recognises six types of bandhas, including three major locks (Mula ‘root’, Uddiyana ‘lifting of the diaphragm’, Jalandhara ‘throat’) and two minor (Hasta ‘hand’ and Pada ‘foot’), plus the Maha bandha - the great lock, which is the practice of the three major bandhas at the same time. 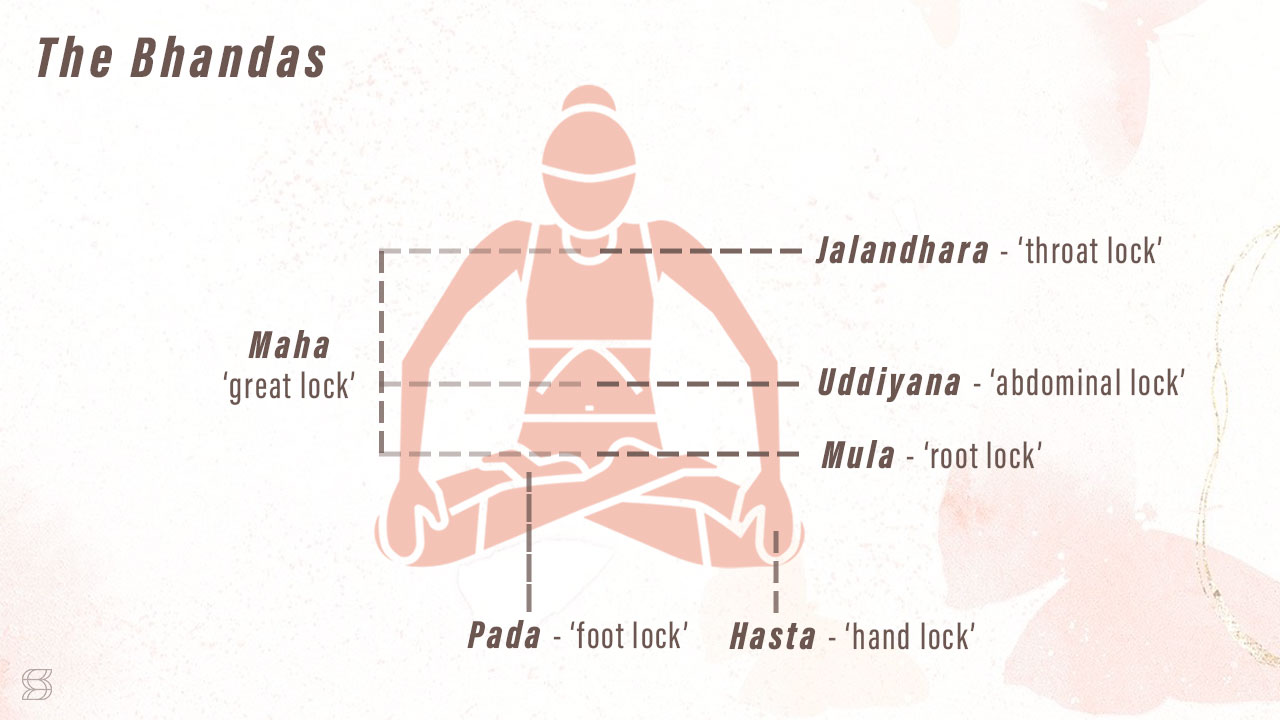 ** NOTE: The Hatha Yoga Pradipika describes Uddiyana and Mula Bandha as practices that use the body and mind to direct the movement of energy. The idea of a rooting and lifting a bandha could also be used as a way to describe our exploration of balance. The concept of a Bandha can cover many expressions be it physical, energetic and metaphorical.Although the Bandhas are translated as a ‘lock’, this is not to be solely connected to a physical engagement of muscle groups, but more generally as a focused internal awareness with a direction of energy flow and movement in the body.

Sanskrit - The Sanskrit word Mula refers to the root of a plant or tree. A term meaning “root lock”, Mula Bandha is the yogic practice of drawing the root charka up and in.

Location - The root chakra is said to be located at the base of the torso (or the perineum), which is the area between your anus and genitals. Your pelvic floor muscles support your bladder, bowels, and womb.

Chakra - associated with the Muladhara chakra, the lowest of the energy along the spine. This bandha directs the energy flow to the rectum to stimulate the pelvic floor muscles and urogenital organs.

Engagement - To engage the root lock, contract the perineum muscles inward and upward. Start by squeezing the muscles around your perineum on the inhale. Then, let them go on the exhale. Try doing this several times a day, in order to get to know your Mula bandha.
* For men, this is the region between the testes and the anus.
* For women, it involves the pelvic floor muscles behind the cervix.

Benefits - help strengthen the pelvic floor muscles and assist with bladder control. Also believed to enhance our powers of concentration, while also bringing in a state of greater calm and equanimity to the practitioner.

Sanskrit - In Sanskirt, Uddiyana means ‘flying up’, which pretty accurately describes the feeling of drawing the belly in and up that this bandha requires.

Location - It spans the connection between the chest and abdomen, and attaches to the base of the rib cage and lumbar spine. Internally it stretches the diaphragm, stomach, and abdomen up and back.

Chakra - The abdomen is the seat of power in the body and the locus for the third chakra, Manipura, located at the navel. The abdominal lift transmits this power to higher centres - the heart and upper extremities.

Engagement - To engage this bandha, stand and spread your feet shoulder distance apart.
Bend forward, keeping your back straight, and place your hands on your knees or shins.
Holding this position, pretend to inhale without taking in air.
Your ribs should protrude, and you should feel your abdominal wall and internal organs pushing up and back.
Hold the lock as long as possible, then release and take a deep breath through the nose.

** Note: this is not to be confused with natural core engagement. Uddiyana Bandha isn’t something that we have ‘held’ in an entire flow.

Location - Positioned in the throat region, this bandha inhibits the flow of Prana in the subtle body, and is believed to control the stream of energy through the nerves and energy channels of the neck.

Chakra - Jalandhara bandha is a subtle process that works on the internal energy systems. It activates and energises the Vishuddha (throat) chakra), which is believed to aid in communication, freedom, and self-expression.

Engagement - This bandha is performed by extending the neck while lifting the heart, then dropping the chin to the chest. The tongue presses into the roof of the mouth.

To engage the throat lock, sit cross-legged with your back straight. Press your palms into your knees, straighten your elbows, and inhale through your nose, pulling your chin toward your neck. (You can learn more about Mudras from our ‘Yoga Philosphy with Angie: Mudras’ video on the membership).

Benefits - This powerful energy lock is said to compress and stimulate the sinuses. This helps regulate and balance both the circulatory and respiratory systems. The throat pressure gently balances the thyroid gland, helping to regulate the metabolism.

Sanskrit - The term comes from the Sanskrit ‘Hasta’ meaning hand.

Chakra - Hasta Bandha is connected with the heart chakra, Anahata.

Engagement - To engage Hasta bandha place your hands on the yoga mat, spreading your fingers far apart to provide a solid base of support.
Slowly put weight onto your hands, letting the area where your thumb and pointer finger meet carry the most weight.
Rotate your forearm, if necessary, to direct your weight onto this area. Lightly grip the mat with your fingertips. You should feel no pressure in the center of your palm.

Benefits - This bandha will really take your arm balances to a new level as it strengthens your hands, protects your wrists, and improves your balance.

Sanskrit - The term comes from the Sanskrit ‘Pada’ meaning foot lock or seal and connects your body with the earth.

Chakra - Pada Bandha is associated with the root chakra, Muladhara.

Engagement - To activate the foot lock place the soles of your feet on the ground so that your weight is supported by the triangle between your big toe, little toe, and ankle. Practice keeping inner arches and ankles lifted or mentally pulling up through these areas.

Benefits - creates stability and strength through our legs and feet to improve our balance. Helps to access Mula Bhanda to create lightness in our standing postures.

Sanskrit - The term comes from the Sanskrit ‘maha’ meaning great.

Location - a combination of all three major bandhas.

Chakra - the Maha bandha gives benefits to all the chakras and rejuvenates the cells of the body.

Engagement - To begin Maha bandha first, engage the Mula bandha.
Exhale completely and then activate the Jalandhara bandha.
Finally, bend forward and engage the Uddiyana bandha.
To release the Maha bandha, disengage each bandha in the reverse order.

Benefits - awakens the prana in the body, and can have a great positive impact on your mind and body as you advance your yoga practice.

Be the first to know about offers and exciting news from Cat Meffan and the Soul Sanctuary: