Getting Intimate With Our Fears

“ The more we try to remove ourselves from fear, the more we remain entrapped within it. If you truly are looking for genuine transformation, you need to look no further than your fear. For in it there exists not only an abundance of trapped energy but also the very testing and challenge that we need in order to live a deeper, more authentic life”
- Emotional Intimacy, Robert Augustus Masters, Phd

According to Swiss-American psychiatrist and renowned author, Elisabeth Kubler-Ross, there are only two emotions that we truly experience; fear and love. Her teachings establish that emotions such as happiness, peace, joy, and contentment all flow from love, whereas fear derives from negative emotions such as anger, guilt, anxiety, and hate. If you are living in a place of anxiety, guilt, or anger, you are not truly experiencing or living within a place of love as you can not live within both emotions simultaneously. You are in one or the other.

The juxtaposition of Elisabeth’s statement and theory really provoked more research of how fear and love cannot exist together. Surely within an argument with a loved one, although there is undeniably anger, frustrations and other ‘negative’ emotions, there is still (in most cases) love for the other person. Through more research, what kept rising to the surface, is that it refers to the pivotal moment that you are feeling a specific emotion, and that emotion, is defined by experiencing it through a lens of either love or fear.

What exactly does this mean? It means to lie somewhere beneath the normal level of conscious awareness, leading people to believe they are limited, suffering individuals. But fear only really exists in the mind. It is not a tangible emotion, it is self-inflicted. It is not real! The only place that fear can exist is in our thoughts of the future. It is a product of our imagination, causing us to fear things that do not, at present and may not, ever exist. The more energy and power we give our thoughts, the more strength and more impact they will have on us.

With chronic fear, you’re not experiencing anxiety, you’re living it. The fear response becomes your lifestyle, influencing everything you think, feel and do.

Tony Robbins suggests multiple strategies of how to stop living in fear below, including the most prominent; commitment to facing your fear.

Dr. Joe Dispenza sums up what living in fear looks like in our mind and body - “When we are living in fear, we are living in survival; and what we typically do is select the worst-case scenario and then prepare ourselves for when it occurs. When we get it right, we pat ourselves on the shoulder, but when we don’t get it right it's called anxiety, insomnia, neurosis, OCD; and the reason being is because we select that worst-case scenario and embrace ourselves emotionally for the outcome.

When you combine that thought and that feeling, we cannot move into a state of being, knocking our brain and body out of balance just by thought alone. The fear then becomes an addiction and we begin to reaffirm that addiction by thinking those thoughts that create that emotional state.”

Dispenza infamously teaches how meditation (being in the present and connecting to the quantum realm) and rewiring our brain, thought pathways, and therefore our conscious mind; help with moving out of living in a state of fear.

Emotional fear predominantly shows up through the individual via our own thought patterns, doubts, self-confidence, and worry which we can (through yoga, meditation, counseling, education, self-help etc) work to become aware of and start putting steps into practice. But there is also another form of fear that plays a huge role in our life, and that is collective fear.

Dr. Robert Augustus Masters has a whole chapter about Collective Fear in his book Emotional Intimacy ….. and expresses that
“Collective fear is natural, at least to some degree, for any group that is at the mercy of “outside” forces, like unfriendly factions or dangerous weather. Such fear can, of course, be amplified by media outlets and political or religious leaders or other cultural influences, yet it remains an inevitable phenomenon, just like individual fear. It is the kind of fear that is called “our” fear.

When we are really open to collective fear, we’re hit in both the gut and the heart. We then feel not only our own fear but also that of so many others, often in conjunction with a rising care for them, so that our capacity for compassion kicks into gear.”

But with collective fear, can also bring heightened panic and control. Over the past decade, we have seen a rise in collective fear due to terrorism, natural disasters, climate change, and the most recent pandemic. It is a panic and fearful response to the unknown outside of our own thought processes. 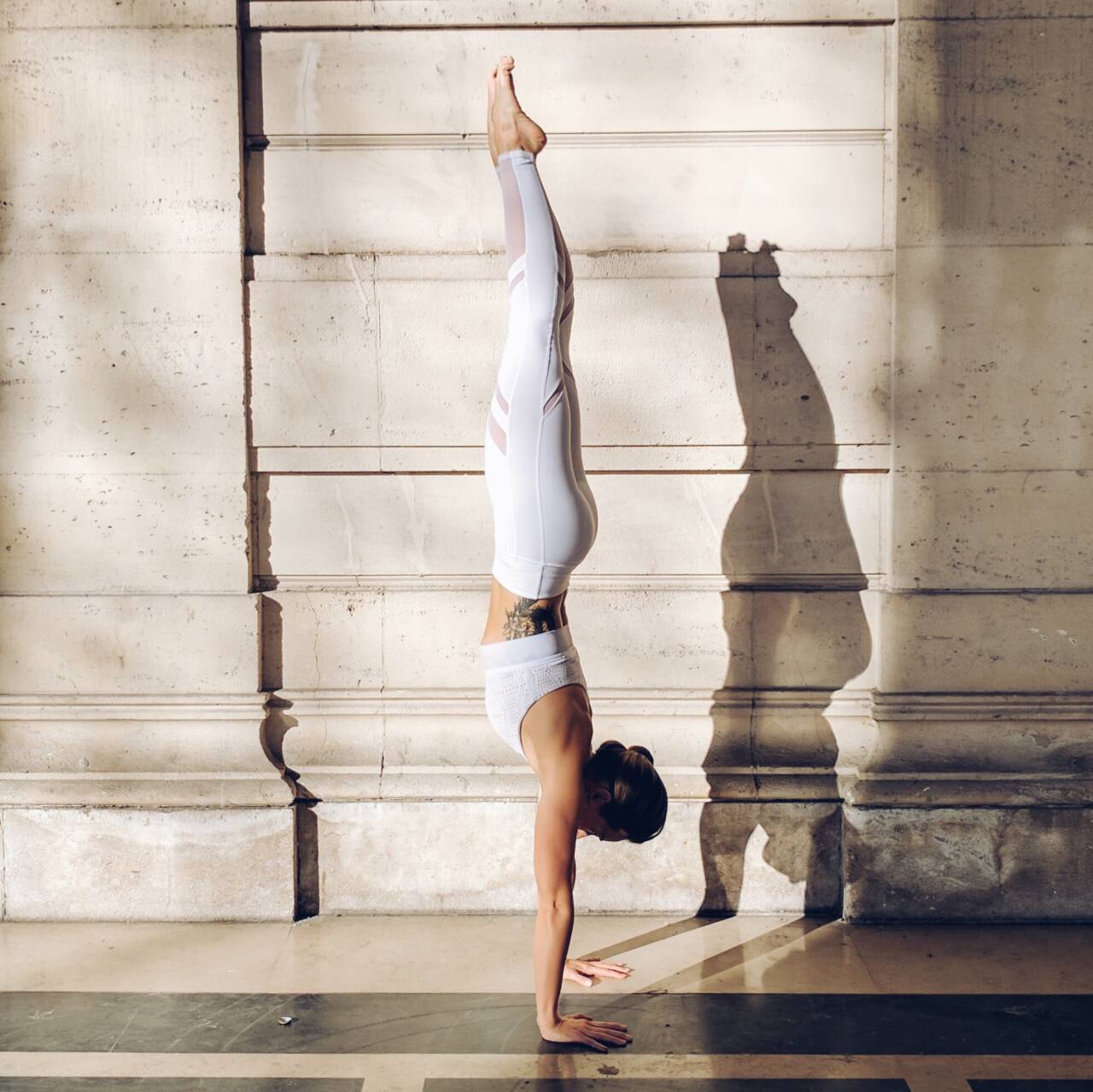 We are focusing this month on how fears show up both on and off your mat and are helping you dive deeper into this through your practices.

You can start by taking notice of where your fears resonate on the mat and in your yoga practice. For many of us, handstands and inversions trigger the fear emotion in us. Can you dive deeper into understanding why this might be? Is it because you’re fearful of falling and being injured? Or fear of failing?

It is undeniable that handstands require a lot of strength, flexibility, and mobility, however, what gets someone into handstands, is mindset. The key with handstands and inversions, or any asana that triggers fear is to work up to it slowly, to take as many steps as you need, embracing the journey.

Eleanor Roosevelt once said:
“You gain strength, courage and confidence by every experience in which you really stop to look fear in the face. You are able to say to yourself, ‘I have lived through this horror. I can take the next thing that comes along’. You must do the thing you think you cannot do”.

It would be recommended to take some time during your journaling this month to really deep dive into where your fears, anxiety, self-doubt, paranoia, anger, judgment, negative thinking stem from and how you can start to move this from a place of fear into a place of love.

Below are some Journaling Prompts for you to work with alongside the Soul Sanctuary practices for this month:

You can practice along with our monthly playlist HERE

And download our monthly printable calendar of other suggested Soul Sanctuary flows that align with this months theme.

“Everything you want, is on the other side of fear” - Jack Canfield